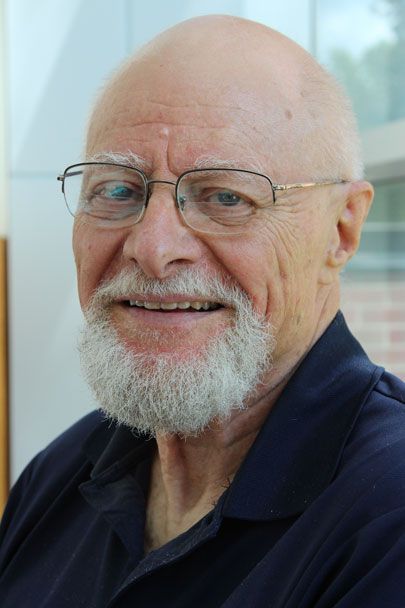 Ted Haaland discovered his art later in life after losing his wife Maria W. Faust to cancer in 2011. Her deep appreciation for the art of poetry awakened his muse and he began writing poems every day. Now with a collection of over 7,000 poems to his name, Ted is a strong believer in the New Formalists concepts of poetry, he admires rhyme and meter and their use in all poetic forms; he writes sonnets, of course, but also haiku, limericks, longer poetic forms and two-line "zingers." Often amused by the strange twists of word definitions and usage, he ventures that he has never met a pun he didn’t like, which is to be expected, since the pun is the beginning of metaphor and metaphor is the foundation of poetry.

In 2012 Ted asked and received permission to direct the Great River Shakespeare Festival Sonnet Contest and renamed it the Maria W. Faust Sonnet Contest of the Great River Shakespeare Festival. He directs the contest today with the help of the three Winona Poets Laureate, who serve as judges, David Marshall, who organizes entries for the judges, and Heidi Bryant, who directs communications and manages the online entry process and website.

Ted has seen the Maria W. Faust Sonnet Contest grow to include not only sonnets from almost all of the United States and its territories and possessions, but also from nations around the world. The contest is now widely internationally known and highly rated in literary magazines and on the Internet.

Winners of the 2018 Sonnet Contest will be announced at the Awards Ceremony (see details above) to coincide with the end of the GRSF season. The public is invited to hear winning sonnets read (some by members of the GRSF acting company), meet some of the winning poets, and enjoy snacks and music by Flutistry. This is a free event. The winning sonnets will be posted to the website immediately following the ceremony: sonnetcontest.org.